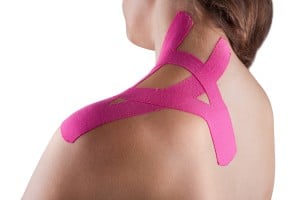 Physiotaping originated in Japan in the 1970’s. Doctors there were looking for a sports taping method that would assist in the healing of tissue and muscles but not reduce the range of motion of a joint. After many years of research, physiotaping was born. Once medical professionals began seeing the numerous beneficial effects, it quickly moved into the United States and many other countries. Now you see athletes wearing brightly colored tape at most sporting events. This tape is called physiotape. Taping involves the application of self-adhesive cotton tapes to the body. The tape is applied directly to the skin and can be worn for up to a week.

How does it work?

While the effects of physiotaping are immediately noticeable, the science behind the effects is currently only hypothesized. There are three main ways physiotape is believed to work; pain reduction, improved function and reduced swelling. Physiotape may work to reduce pain by stimulating nerve receptors in and under the skin. These receptors detect stimuli, including temperature, movement and touch. Signals from the receptors that detect movement and touch reach the brain faster than pain signals, therefore the pain signal is interrupted and the pain is decreased. This is the same concept at work when you bump your head and quickly rub it to decrease the pain. Physiotape also works to improve the function at a joint. When tape is applied with considerable stretch it changes the position of bony structure. This allows joints to move more freely and with correct alignment. Applied physiotape can also help to reduce swelling in an area. It is believed that the tape helps to active that autonomic nervous system, which regulates blood circulation and in turn decreases inflammation. It is also believed that the tape directly affects the lymphatic system, allowing excess fluid to drain from the area quicker. 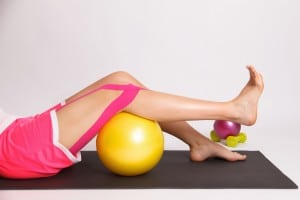 Physiotaping can be used to help decrease a variety of symptoms associated with the muscular and skeletal systems. It is widely used to reduce muscular imbalances and muscular tension. It can also help to correct improperly aligned bones and joints. Other indications for physiotape include headaches, menstrual cramps, swelling and sinus blockage.

If the taped site becomes irritated, itchy or red, remove the tape. If the tape is increasing your pain or discomfort, remove it. It is okay to shower, bath or swim with physiotape on. However, when the tape is wet the adhesiveness is reduced, so patting the area dry rather than rubbing, is the best option. If the tape begins to roll, attempt to replace it. If it continues to roll, snip it off at the base of the roll. If you are having trouble with the tape staying on, shave the area prior to your next taping session. Typically, the easiest way to remove the tape is during a hot shower with a little bit of soap. Pull the tape off in the direction of the hair growth for easiest removal.