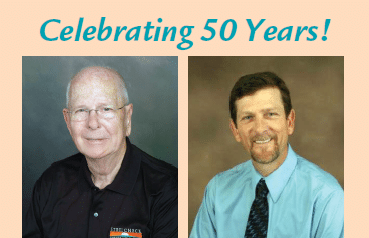 Fifty years ago, Elvis topped the charts, folks were tuning in to watch I Love Lucy on their television sets and gas was a mere 29 cents a gallon.
At that same time, folks in Crystal Lake took notice as a circular building went up on Route 14, introducing a quietly determined doctor, practicing a little known medical technique called Chiropractic.
Dr. Dan Strelcheck had big hopes and dreams for sharing his enthusiasm and ability as a Chiropractor, though his journey began years before when he was playing football in St. Petersburg College.
During a game, Dan—who played running back, was tackled and injured, surviving a crushing blow to the bones in his head and face. He suffered from debilitating migraine headaches and convulsions. His long-term prognosis was bleak.
Eager to help their son, his parents sought help from a local chiropractor. With treatment, Dan was able to eliminate prescription medications as his symptoms went away. Ultimately, his experience inspired him to become a chiropractor to help others.
After graduating from the prestigious Palmer Chiropractic College in Davenport Iowa, some of his first work as a Chiropractor was in a sanitarium.
With the support of his family and hands on help from his lovely bride, Barbara, Dr. Dan’s practice opened in Crystal Lake, October 1958. Residents trickled in seeking help, but were a little skeptical of the chiropractic method. Slowly, he won them over one at a time with his gentle and effective techniques. Nearly all new patients referred others to the practice.

hands on help from his lovely bride, Barbara, Dr. Dan’s practice opened in Crystal Lake, October 1958. Residents trickled in seeking help, but were a little skeptical of the chiropractic method. Slowly, he won them over one at a time with his gentle and effective techniques. Nearly all new patients referred others to the practice.
“I owe the success of my practice to my patients,” says Dr. Dan.
At that time, doctors didn’t advertise and Chiropractors were allowed only a 2-inch by 2-inch lettering on their mailbox or in the phone book.
“Satisfied patients have a unique, inside perspective about their experience and are best at explaining to others why they trust and count on their doctor for their health,” Dr. Dan explains.
Over the years, Dr. Dan’s son, Daniel Jr., earned his Chiropractic license and joined the practice in many roles—first as a Chiropractor and then as the owner, managing day-to-day operations.
With three doctors, the clinic was able to take on more patients and virtually eliminate wait times. That is, until Dr. Daniel Jr.’s reputation for helping patients cultivated a tremendous following.
More than a few more hands were needed to handle the growing popularity of the Strelcheck clinic.
Leveraging two decades of experience in sales and business development, Dr. Daniel Jr. prepared the clinic in every way starting with the essentials. Developing a clear financial plan, redefining business relationships and the recruitment of another Palmer graduate doctor came first. The reconfiguration of the first and second floors of the clinic created nine treatment rooms and three massage rooms and made space for a physical therapy department and expanded radiography services.
Finally, Dr. Daniel Jr. sought out opportunities with local businesses and charitable organizations to accept free spinal screenings and chiropractic care to give back to the community that had so readily supported him and his father during the first few decades in practice.
Strelcheck made headline news in the Northwest Herald’s 2006 Top of Mind survey of local businesses that were most recognized in the area. That, along with a 22% growth increase in 2007, set the stage for celebrating the clinic’s milestone 50th anniversary in 2008.
Today, a staff of twenty serves thousands of patients from McHenry county and the surrounding area, offering patients an unprecedented scope of advanced Chiropractic techniques including Sacral Occipital, Activator, Atlas Orthogonal, Gonstead, Thompson, Diversified, and TMJ methods.

Posted In: Events By Strelcheck